If you have the passion to serve the country and you also want to become your career in the Army, then NDA is the best option for this. To become an NDA officer, not only your brain, but also your physical fitness should be good. For this, there is also your NDA Physical Fitness Test, which needs to be cleared only then you can join NDA.
Today millions of students are making their careers in NDA, but many students do not know properly how to prepare for NDA exam, so our post today is for those students who are doing NDA Ki Taiyari or who are in NDA Want to make a career 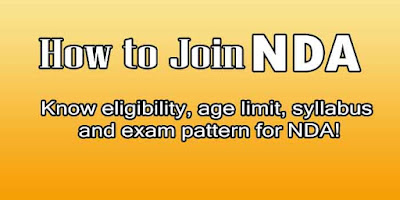 NDA is one of the 3 major services of India, Army, Navy and Air Force etc. Any student who wants to serve the country of India can join any of these three major services, but for this they have to pass this exam. The full name of NDA is "National Defense Academy" which is also known as "National Defense Academy" in Hindi. The NDA is the world's first triangular service academy.

The NDA exam is conducted 2 times a year by the Union Public Service Commission (UPSC), the National Defense Academy has so far produced 27 service heads including 3 Param Vir Chakra and 9 Ashoka Chakra recipients.

How To Join NDA

To join NDA, the candidate has to pass through 12th Class Physics and Maths Subject. After passing the 12th pass, you can fill the NDA exam form and take the exam, its forms are released every year in June and December. You can apply this form online by visiting the UPSC website. After clearing the Entrance Examination of NDA you are called for SSB (Service Selection Board) Interview.

There are many tests in this, NDA Physical Fitness Test, Group Discussion etc. which need to be cleared. After the examination is completed, according to the post, you are sent for training of the post you have selected, after passing this training, you can join any post in the NDA.

In order to join NDA or apply in NDA, the candidate must have the qualifications given below.

Candidates applying for NDA exam should be between 16.5 and maximum 19 years of age.


How to prepare for NDA

Solve the previous year's question paper of the NDA exam so that you get an idea for the exam.
Make the habit of reading Newspaper, this will increase the knowledge of Current Affair as well as pay attention to General Knowledge.

There are 2 papers in NDA Exam, one is Mathematics and the other is General Ability, both subject time is 2.30-2.30 hours and Negative Marking for wrong answer. The NDA exam consists of a total of 900 marks through both Hindi and English medium.

After passing both these exams, SSB is called for interview. This is the second round of NDA examination which is of 900 marks. This interview is 4 to 5 hours.

If you are preparing for NDA exam then you must know NDA Ka Syllabus because it helps you in preparing. Now let us tell you NDA Syllabus 2019

Candidates who had given papers for NDA-1 in NDA Exam 2019 on 21 April and NDA-2 on 17 November, their NDA Ka Result will be declared by July and October 2019 and those candidates who missed the exam will be declared. Start preparing for the upcoming exam of NDA in 2020, now we are telling you the time table of NDA Exam 2020 so that you will know when to submit the form for it.

Friends, this was the information of NDA Exam. Hopefully, you will have got complete information about How to join NDA toHow to Prepare for NDA, in which we have given you what is NDA, NDA Eligibility, NDA Syllabus, NDA Me Age Limit Everyone would have been told correctly. Now you will not have much problem in preparing for NDA and if you could, you could clear the NDA exam in the first attempt, just prepare with your dedication and hard work, you will definitely succeed in the NDA exam. So tell your friends about NDA Kaise Bante Hain. If you liked the post, do it like and share, thanks!